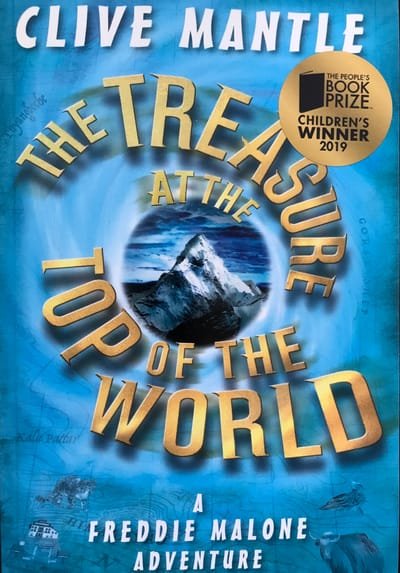 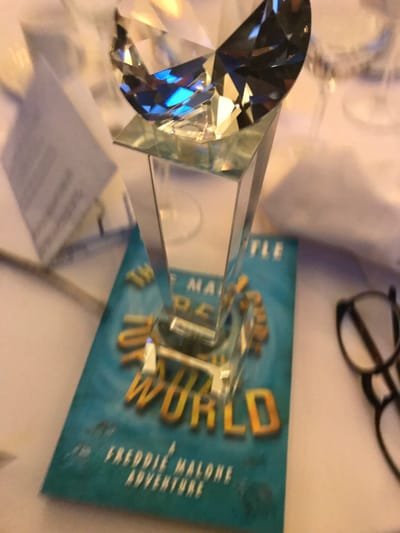 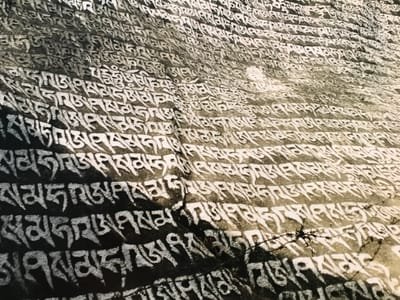 Clive Mantle. ‘The Treasure at the Top of the World’


I have long held the dream of writing to inspire the young in the way I was bewitched as a young boy by one of my Literary heroes, Oliver Postgate.
‘The Treasure at the Top of the World’ is the first in a series of commissioned adventures for my leading character Freddie Malone. It was published in June 2018 and won the prestigious Peoples Book Prize 2019. [peoplesbookprize.com]

“The idea is everything”– is a phrase I am well used to hearing in the film and TV business. It’s a general truism that camouflages a mountain of hard work. But it doesn’t matter how well you write, if the idea isn’t good, people won’t read it.
My idea took many years to filter through and it came to me as I walked away from Mount Everest.
Having completed the gruelling but wonderful trek to Everest Base Camp and beyond, my thoughts turned to ‘What’s next?’
The idea came in a flash. Boy receives World Map for his birthday, hangs it on his wall and disappears through it to any destination on earth, at any period in History.
Freddie can go anywhere, at any time. He can observe History happening and bring it to life for a modern audience. Living history.
‘The Treasure at the Top of the World’ takes place in 21st Century England and 20th Century Nepal.
Mallory, Irvine, Yaks and Yetis, First love, Treasure, Disasters and Adventure. The mountain kingdom hosts the quest to return stolen relics from a ruthless adversary and is counterpointed with Freddie’s best friend Connor stranded at home in the present day. He has to deal with his own problems in the shape of persistent bullies, as his weight makes him an easy and soft target. Both boys have many great lessons to learn and adventures to experience. The strong female role model in the story is Mindhu, a funny, strong and captivating Sherpana who steals Freddie’s heart.
The challenges for me were mainly those of paring down my original completed first draught, which weighed in at a hefty 125,000 words! Too long, as even I knew. My fantastic agent and guide in the process Penny Luithlen, set me incredibly helpful targets. A paragraph was about 8 sentences on average and she asked me to turn those 8 into 5 without losing the essence. I went away and dutifully did that and in the process fell in love with editing.
Then Penny encouraged me to turn those revised 5 sentences into 3. It can be done. It was published at 52,000 words. Less is more.
All those precious adjectives and wordy cul-de-sacs we think are vital can be [radically] pruned. I found it liberating. Suddenly the story and characters were allowed to leap off the page. As a consequence, my second book was 60,000 when I finished the first draught and will be 52,000 when it emerges in June 2019. I had saved myself a lot of work being economical.
I have read countless testimonies from the great mountaineers safely returned from tackling Everest, but was not aware of a book like mine introducing the younger reader to the majesty and miracle that is Nepal. Not only the visual splendours, but the magnificence and generosity of its people.

I want my books to plant the seed of travel and adventure in young minds. Freddie is placed in Nepal during a real historic event and can communicate what that feels like as he relates his tales to Connor on return. My aim is always to inspire and encourage, both to read and to explore. We must enthuse the young mind with reading before the ‘You Tube’ generation lose the ability to pick up and enjoy books.
Freddie Malone’s second adventure is published in June 2019. ‘A Jewel in the Sands of Time’ is set in two periods in Ancient Egypt and the present day. Pharaohs, Intrigue, Tombs, Chariots, Pyramids, Slavery and of course the story of a long dead Boy King whose name resonates louder today than ever. Tutankhamun.
Book three, due for release in June 2021, is set in London, with the backdrop of The Great Plague of 1665 and the Great Fire of 1666. Freddie will be a witness to these huge events.
Freddie can’t change History in the grand scale of things, but he can operate on a human level to make an important difference in the thick of the action.
It is a joy for me to enter Freddie’s universe and retreat for hours at a time from a modern world that often baffles and confuses me. Emerging blinking into the harsh realities of our complex society often comes as a shock.

I hope you enjoy the series as it unravels. Your comments and feedback would be very much appreciated.
It is published by Award [awardpublications.co.uk] and available via the usual online outlets. On Amazon it has the very handy ‘Look inside’ feature which means you can browse before you buy. Try it, it’s very helpful.
It can of course be ordered via local bookshops if they haven’t got it in stock. There’s nothing like holding the book before you buy it in my opinion.
There is a Kindle version and I have recorded the Audiobook version, which will be available from 1st April 2019. [oakhillpublishing.com]

THANK YOU FOR YOUR SUPPORT

An extract from ‘The Treasure at the Top of the World’

12:01 a.m. Was he still dreaming?
Freddie sat up. He felt a tremor of anticipation and then a crackle and surge of energy in his bedroom that made his eyes grow wide in alarm. From the silence of the rest of the house he started to hear something; music and voices swelling with increasing urgency, as they began swirling invisibly around him. Dozens of different people seemed to be talking in snippets of strange languages, like frenzied ghosts trying to impart crucial messages. Snatches of orchestras, rock bands, opera and bagpipes came and went, mixed chaotically with television and radio excerpts, as if someone was spinning a gigantic tuning dial. It was utterly bewildering. Freddie sat, open mouthed, trying to work out who was playing this trick on him. It wasn’t some sort of birthday surprise, was it? If so, it was backfiring badly. He was scared stiff.
Light cut into the bedroom around the heavy curtains from the full moon outside, illuminating the wall opposite and the vivid colours of his majestic World Map. Freddie’s gaze was drawn to India. He tried to look away, but it felt like his eyeballs were being dragged by magnets back towards the map. All about him the tumult increased. The sounds were searing his eardrums and now there seemed to be a growing wind coursing around the room as well.
As Freddie continued to stare at the map, it suddenly started to pucker, showing the relief of cities, mountains and rivers. Freddie could not believe his eyes. His gaze was drawn upwards over the northern border India shared with Nepal. Completely against his will and with no control, his focus shot towards the capital, Kathmandu. Freddie blinked, trying to clear his head. He had to be seeing things, surely. The map appeared to be completely alive. Elephants and buses, people, planes, boats and trains sprang to life and began streaming across it, like ants in a forest. It was like his whole bedroom wall had become a vivid projection of the earth from the sky. It was alive. Freddie began backing away towards his pillows and clutched at the mattress.
Then, with a sudden and irresistible wrench, an unseen force ripped him away from his bed. He tried to hang on by clawing at the wooden headboard behind his pillow, but his body was stretched horizontally a foot above his duvet, which suddenly shot out from underneath him and joined the tornado of socks, pants and dirty washing dancing frantically around his room. Try as he might, he could not shift his gaze from Uncle Patrick’s map. It appeared to have an absolute and unbreakable hold over him.
“Help! Stop it now! I’ve had enough. It’s not funny any more. Dad! Mum! Stop it. Please!”
Now the map seemed to grow until it filled his entire field of vision. His eyes were drawn roughly eastwards, from Kathmandu to a place called Namche Bazaar, the letters of which dissolved, as tiny mountain tops thrust through the parchment in their place. Freddie’s desperate last grip on the pine frame was broken and he hurtled towards the wall.
“No! Please ... No! Help!”
There was a thundering crack, like ice splitting on a frozen lake, as a huge tear appeared in the map. Beyond it, Freddie could see a tunnel; an endless vortex of swirling bright lights. The wall of his bedroom was melting and splitting, creating a gaping hole. The plaster and brickwork had become fluid.
“Help!” he tried to scream, but the sound was lost among a thousand other shouts. “Help me!” he cried again, but all the voices seemed to echo and mock him simultaneously. Freddie was speeding feet first towards the widening gap and it parted just enough to allow him through, accompanied by a truly deafening sound, as if a thousand sheets of paper were all torn at once.
He desperately tried to hang on to the jagged edge of the hole in his bedroom wall, but the bricks dissolved in his grasp……..